The supposed origin of Olmeda is in the so-called “The unpopulated of Valmores”, a place located about three kilometers from the current situation of the town. Today it is known that Olmeda and Valmores coexisted for approximately three hundred years. Valmores being a fundamental pillar in the history of the Olmeda.

This fact is mentioned in various documents, one from 1188 and another from 1214. Therefore, in the process of repopulating the Land of Alcalá, Valmores was among its villages. In the organization of the quarter of Pezuela in 1495, Valmores no longer appears, so after its depopulation probably before the 15th century, its territory was divided between the neighboring towns of Corpa, Pezuela and La Olmeda.

Juan Sánchez Carrasco, a resident of La Olmeda, was the judge of the Pezuela room who participated in the distribution of the igualas 0 In the document you can see the importance that, at this time, La Olmeda had in relation to El Villar, Orusco and Carabaña. And although the ordinances date from 1530, they reference earlier ordinances dated to the late 15th century. 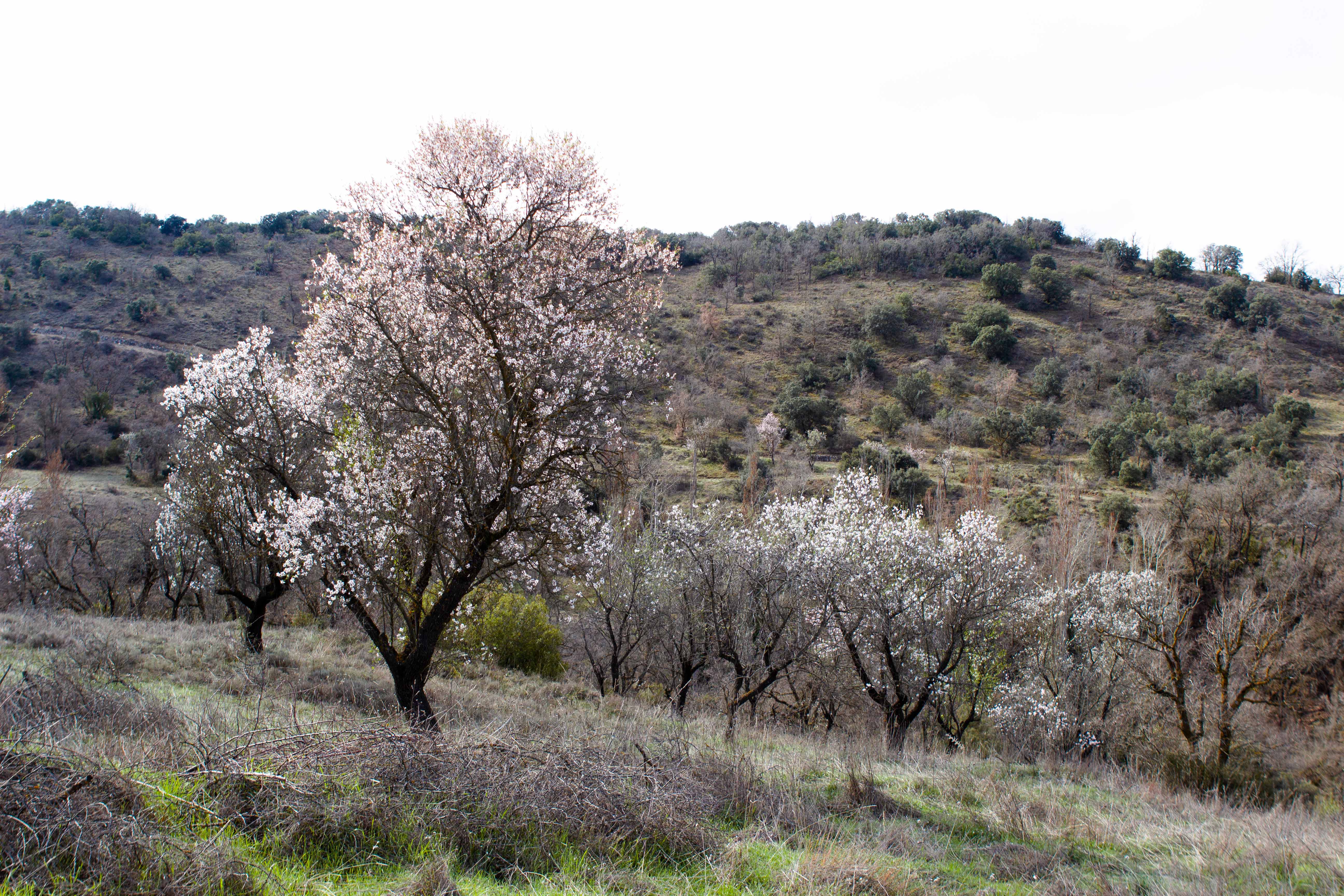 Regarding the causes of depopulation, the best known is the one mentioned in answer 56 of the Topographic Relations of Felipe II; in which the depopulation is attributed to a divine punishment “... the cause for which it depopulated it is said that, living in it a leading woman, there was some anger with a guard in the field, and she ordered a slave of hers to give her a stabbing the guard; and the slave went after him; and the guard was entered in a church of the town that is called Our Lady of Valmores, whose building to the present is, and it was thrown to an image of Our Lady; and the slave stabbed her, and killed her; and that this was due to what they say was depopulated… ”.

In the town they like to associate the disappearance of Valmores with the idea of ​​the creation of La Olmeda, as if its inhabitants, in their flight from Valmores, had settled on this hillside not far from their original settlement.

We do not know how much truth exists in the legend, but being more prosaic, we must consider the possibility that the depopulations that occurred in some of the villages belonging to the Land of Alcalá were due to the tragic demographic period lived between the mid-fourteenth century and early 15th century, with the European Black Death of 1348 that reached the lands of Castile in 1350.

Until the eighteenth century when Don Juan de Goyeneche gathers part of these lands, we do not have news of the place in the documentation. In them he builds the Nuevo Baztán site. This is reflected in the privilege dated July 4, 1713, which allows the delimitation and closure of the term in which Nuevo Baztán was founded:

Sebastián Miñano in 1827, made reference to this place in the section corresponding to the Olmeda de la Cebolla of his geographical dictionary, alluding to the ruins of an ancient temple:

The town was cursed by a murder that would have been committed inside the church, and its inhabitants moved to their current location. This fact is reflected in the following way in the Topographic Relationships of Felipe II, in 1576

In the aforementioned document of 1713, the depopulation of the place is also alluded to, but in this case in a much more concise way saying that it would have been depopulated; "for the injury of the times."

Undoubtedly it would be a reorganization of the territory which would cause the depopulation of Valmores, since in a historical moment in which it depends basically on agriculture and livestock, the planning of the territory is basically carried out through "farms" to have the areas cultivation and grazing as close as possible to the houses. This model was established at the same time that the population increased to the point where these small population centers could not support so many inhabitants.

When you have to go out to work every day outside the closest area of ​​influence of the “village” and enter other nuclei, it no longer makes sense to maintain so many small population centers, which is why they merged, thus forming larger towns.

Thus came the moment when Valmores ceased to be a village, due to the fact that the population left for the nearby towns, especially towards Olmeda, leaving Valmores as a farm, where only one or two families resided, and losing their municipal entity.

Remains that are preserved today 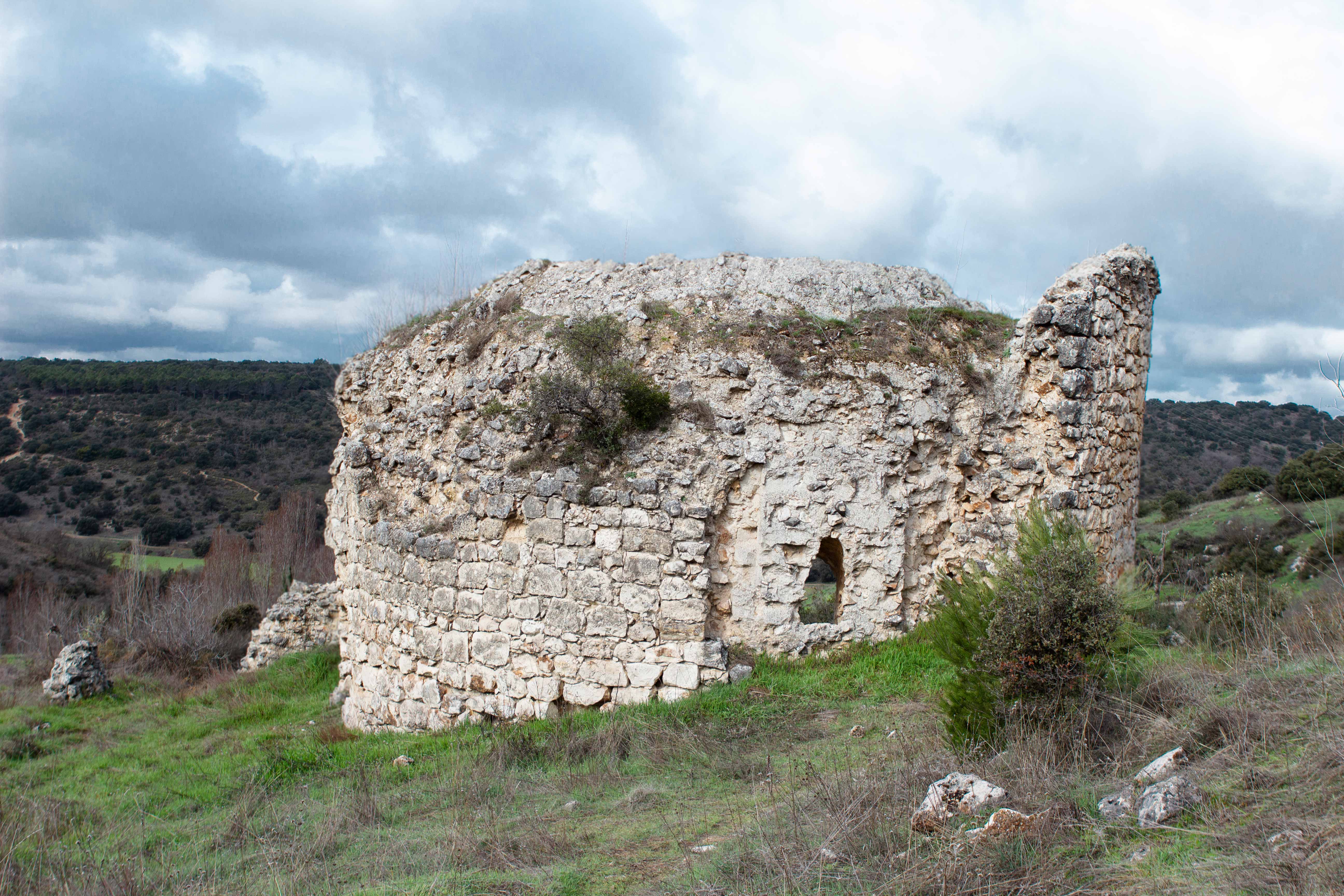 The ruins that remain today would belong to the Hermitage of San Blas, this name is very significant, since it was usual to put the name of this Saint in places where there had been a plague epidemic; This could be one of the reasons for the depopulation of Valmores.

In any case, we cannot specify and fleeing from catastrophic reasons, which could be the causes that motivated said unfolding, of a very diverse nature; bad harvests, poor soil, rearrangement of the population, etc. Valmores would be one of the many places that were depopulated during the last centuries of the Middle Ages

Either way, the place is wrapped in an aura of mystery and legend, according to which the primitive town of Olmeda would be found in what are today the ruins of the hermitage of Valmores.

One of the constructions that are conserved is formed by two great walls of 1.20 m. wide, about 25 m. long and 9 m. High. The Topographic Relations point to the belief that it was originally a Templar property. Undoubtedly its architectural characteristics and its strategic location, dominating a large section of the valley, can induce us to see in it a defensive or lookout construction, possibly even of Muslim origin. It was perhaps a bury that would visually communicate with the space that the village occupied.

It was later used as a hermitage, whose good condition is still reported by the Relations, consecrated to San Blas, a place name that it still conserves, since these ruins are known as 'Paredones de San Blas'. The hermitage of San Blas, which at the height of the 18th century was in a ruinous state of Ruinas-de-Valmores2, was rebuilt by Juan de Goyeneche: "close to said town, which was fallen, and has adorned it with altars and ornaments" 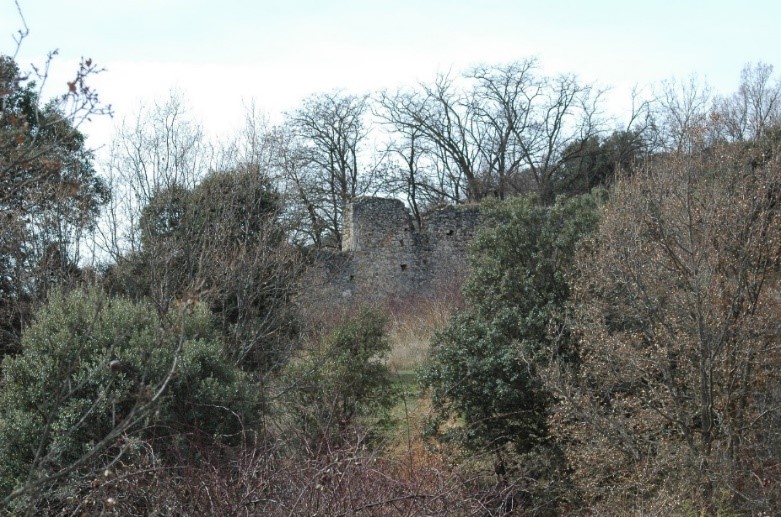 Another of the architectural remains are the ruins of a mill located in the bed of the stream. Building that, even being more modern, its existence is already confirmed in the Relations of Felipe II.

Finally, there are the remains of the church of Nuestra Señora de Valmores, located in the center of the old village about 400 meters from the mill. Currently its apse is still standing, built in masonry covered with ashlar. You can still see the start of the quarter-sphere vault and the remains of its transverse arches.

In the Olmeda Town Hall, at the front of the interior staircase, you can see a plastic composition in four scenes created by the painter Alberto Moreno that shows us the history of Valmores.

The Olmedeños have liked to interpret the name Valmores with the romantic meaning of "valley of love", but the toponymy tells us something less idyllic; indeed Val, is short for valley, but mores does not mean love. Mores, perhaps comes from pre-Roman which means "heap of grain or other vegetable products", from which the Castilian brunette derives, and, by extension, "heap of other things". Next to Morena are the Basques muru "heap", "collado" and more "mojón" (document from the 11th century). In Navarra toponymy there is morea (vasc. More + article a) "cairn, pile of stones". Therefore, it could well be the most probable meaning "valley of stones2 ".