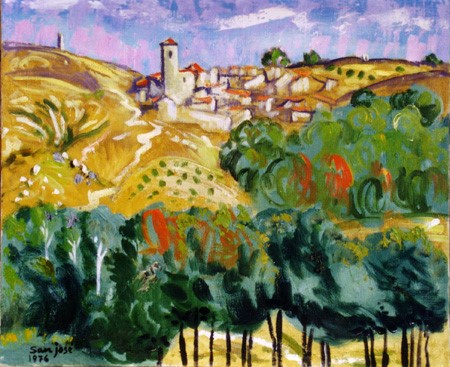 He was born in Madrid in 1919, into a wealthy family. He was introduced to the world of painting by his uncle, the classicist writer and painter Diego San José. Since he was a child he already had a great fondness for painting and watercolor, accompanied by the need to portray everything around him.

In 1931 he entered the Higher School of Commerce, which ended in 1937, in the midst of the Civil War, and which alternated with his studies at the School of Arts and Crafts, where he achieved numerous honorable mentions. "Eugenio Varela my immediate teacher who was scandalized by my freedoms in art, assuring me that because of my rebellion I could never be a good painter, but because of my hobby and my tireless will to work. To console me, he said that how the world is every more and more crazy could aspire to a good secondary position"

He also learned gilding and restoration from the hand of Rafael Lafont, restorer of La Casa Real.

Encouraged by Luis García Ochoa, he made the Madrid Superior School of Fine Arts in 1937 as a student of Daniel Vázquez Díaz, who discovered the pictorial avant-garde for him. "It awoke in me a voracious desire to know everything or new and anti-canonical. I understood that each time and place has its poetry and its painting. That art cannot be standardized because it is a product of man, society and history. These three factors at least the last two are irreversible, they do not reproduce in the same way twice, ever. Only man is unified and uniform and he has not achieved a better way of doing it than with his most sublime invention: Geometry. The geometric is the permanent constant in all the arts, constantly subtly kept many times, especially in painting, by concessions to the external form" There he met Álvaro Delgado, Cirilo Martínez Novillo, Gregorio del Olmo, and Carlos Pascual de Lara, with whom he was closely linked for years.

After the Spanish Civil War, he regained his relationship with the group of Vázquez Díaz's students, who temporarily found a guide in Benjamin Palencia. Together with him, they formed the second Escuela de Vallecas "We had to give the total battle, against academics and against impressionists" After the crisis and the difficulties of meeting that ended up diminishing the small group, the only one left in the school together with Benjamín Palencia was San José. Rafael Zabaleta, who was in a similar project of aesthetic renovation visited them frequently. In 1943 he will be the one to introduce the painter Pilar Aranda, his companion and future wife. Pilar and San José were married in May 1956, and in August of that same year they moved to Venezuela.

In Caracas "the city of eternal spring", after some squeezes and many circumstantial works, they created the "Escuela del Bosque" (quarry of young generations of Venezuelan painters)

In 1970, they decided to return to Spain, settling in Madrid and spending long periods in Olmeda, where he had resided since 1964, the year in which they first arrived with Álvaro Delgado. On his return, he recovers his passion for the Castilian landscape.

Back to the list of painters of the Olmeda >>